The Killaloe Project, located in southeast Western Australia approximately 600km east of Perth and 20-30km northeast of the historic gold mining town of Norseman, comprises two, largely contiguous exploration licences (E63/1018 and E63/1713) and a separate mining licence (M63/177) covering a total combined area of 94km2. There are no other land users and access is generally good although sometimes limited by thick bush and weather events. EL 63/1018 is subject to an agreement with Cullen Exploration Pty Ltd (Cullen), with Cullen owning 20% of this tenement.

There has been extensive previous exploration by multiple companies since the early 1960s targeting gold and nickel mineralisation.  The project is located in the Eastern Goldfields of Western Australia with the interpreted extensions of major structures within the project area. The basement geology of the project consists of a northwest/southeast trending sequence of Archaean greenstones including mafics, ultramafics, volcanoclastic metasediments and granodiorite. Regionally significant, layer parallel structures are interpreted from regional magnetic data and movement along these may have caused structural thickening. Bedrock exposure varies with fresh outcrops separated by large areas of relatively shallow soil cover.

Historic exploration and recent work undertaken by Liontown has identified number of gold and base metal targets that are drill ready and warrant further work. These include:

In addition to being prospective for gold, previous work has also recorded significant nickel and zinc mineralisation which warrants further assessment.

Results from the first round of reconnaissance sampling are encouraging, and in conjunction with historic exploration warrant follow-up with Lachlan Star planning to commence a maiden drill program at the Killaloe Gold Project.  The program will target:

The drilling program, will consist of a minimum of 1,200m of RC drilling, with the majority of the drilling expected to be completed on tenement E63/1018. 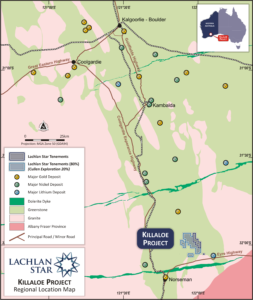